A system running Intel's McAfee VirusScan Enterprise for Linux can be compromised by remote attackers due to a number of security vulnerabilities. Some of these vulnerabilities can be chained together to allow remote code execution as root.

The vulnerabilities described here are present from at least v1.9.2 (released 2/19/2015) through version 2.0.2, (released 4/22/16). The only difference from the older release appears to be updating to a newer version of libc which makes exploiting these vulnerabilities easier.

At a first glance, Intel's McAfee VirusScan Enterprise for Linux has all the best characteristics that vulnerability researchers love: it runs as root, it claims to make your machine more secure, it's not particularly popular, and it looks like it hasn't been updated in a long time. When I noticed all these, I decided to take a look.

Before getting into the details of the vulnerabilities in this product, it helps to have a quick understanding of the system architecture.

The webserver is essentially a UI on top of the scanner service. When a user makes a request to the webserver, the request is reformatted, sent to the root service and then the user is shown the response rendered in an html template. The web interface doesn't do much to limit what data a malicious user can send to the root service.

These ten vulnerabilities are described in this section:

When chaned together, these vulnerabilities allow a remote attacker to execute code as root.

When browsing to many sections of the web interface, an html file path is specified in the tplt parameter, in the figure shown above tplt is set to tasks.html. Running strace on the webserver shows that this causes it to open /opt/NAI/LinuxShield/apache/htdocs/0409/tasks.html as shown here

This leads to the question of what is different between the valid web templates (such as tasks.html) and invalid template files (such as /etc/passwd)

Looking at various template files used by the webserver, it's easy to see that valid template files either contain the magic string __REPLACE_THIS__ or has the two tags [% and %] with any string between them.

If an attacker is able to place these strings into a file on the system (which may be trivial for log files), the attacker could then use the webserver to remotely read the entire file. A limitation of this vulnerability is that the files are being read by the nails user.

When tplt is set to NailsConfig.html or MonitorHost.html, parameters info:7 and info:5 both place untrusted user input in a string being passed to the JavaScript function formatData. A typical value for info:7 is a list of strings such as single,show,serverUtcOffset=-25200. This is then placed into a single-quoted string passed to formatData. If the info:7 parameter is set to something like single'.prototype.constructor=eval('alert("xss"'))+' the eval function will evaluate arbitrary malicious JavaScript before formatData is called.

This payload can then be modified to alert the message "xss" 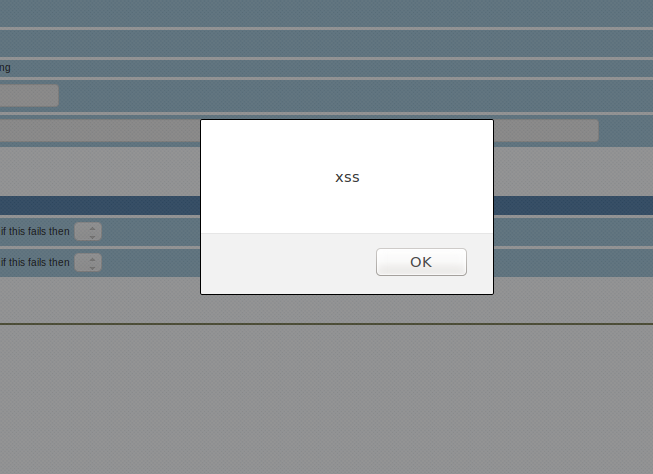 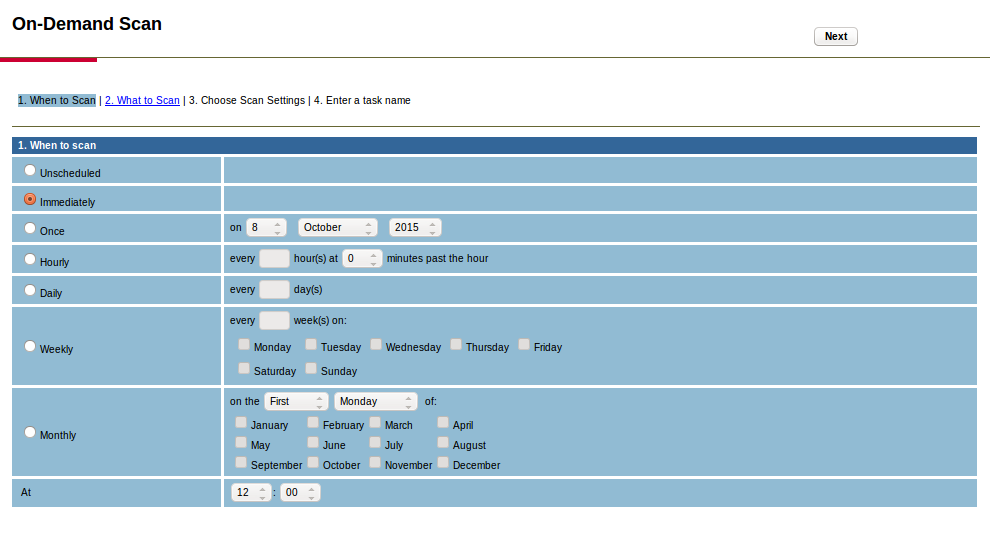 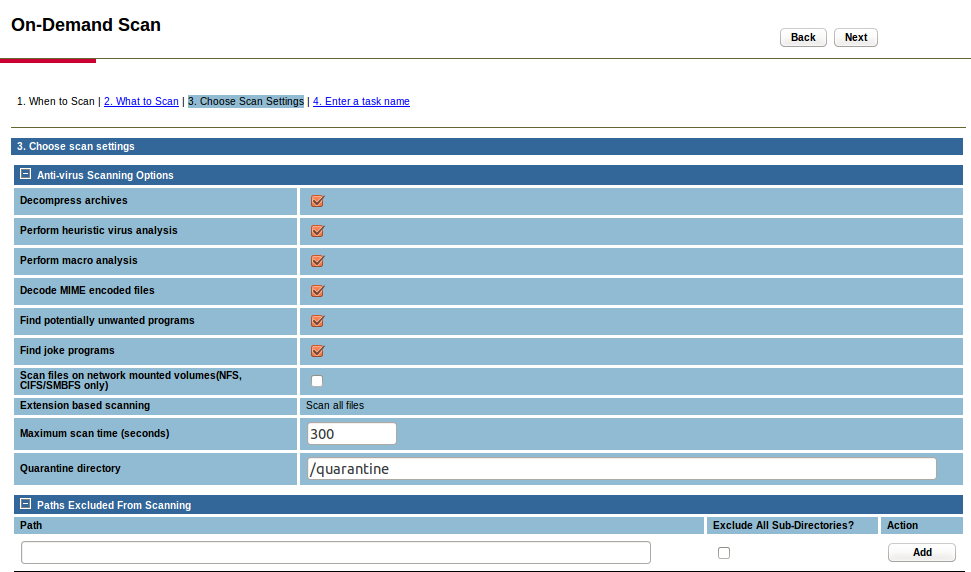 When the final page of the form is submitted, a large request is sent to the server. A subset of the parameters posted are shown here: 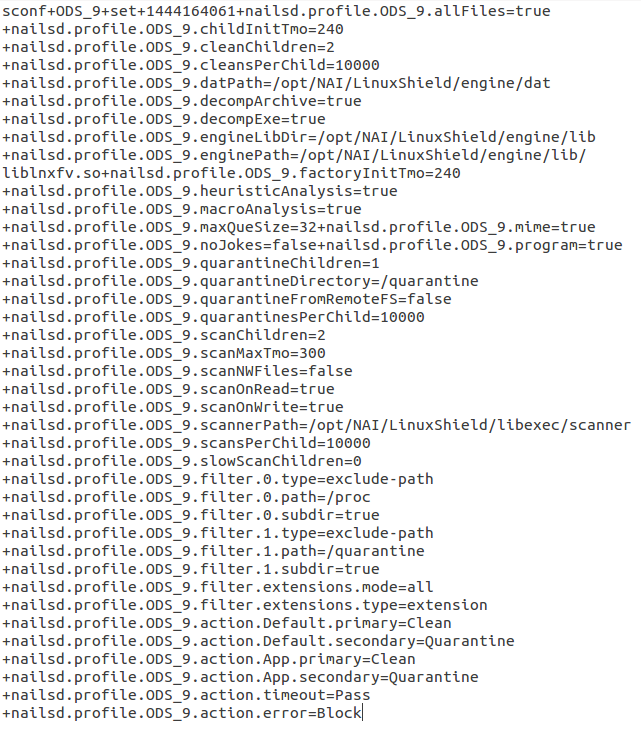 The nailsd.profile.ODS_9.scannerPath variable contains the path that the system will execute to run the scan. Modifying the value to /bin/sh generates the following error in the web interface

Attaching strace shows that this parameter is passed directly to execve from a process running as root.

By changing this variable to an executable on the system, an authenticated user can have that binary executed by the root user. It would be easy to combine it with other XSS or CSRF vulnerabilities to exploit this without authentication.

This can't easily be extended into arbitrary code execution because there are multiple arguments are passed to the binary. However, the scannerPath variable is not the only variable passed directly from the webserver to execve; while some values are hard-coded, four are entirely attacker-controlled leading to the following command:

One vector to exploit this is though /bin/sh which will load a shell script specified by the -e argument and execute it. A local user could use this to escalate privileges, but a remote attacker would need a way to place a malicious shell script onto the system.

The web interface allows users to specify an update server and request updates from it. Since I wanted to find a way for a remote user to write a file to the system this seemed like it might be a useful feature.

To find how the update server was used, I cloned McAfee's update repository locally and then reconfigure the server to download updates from my server.

Two requests are made as part of the update process. First there was a request to /SiteStat.xml, then a request to /catalog.z. The SiteStat file is just a standard XML file that says if a site is enabled and what version of the catalog it is serving. Presumably an update will only be downloaded if this is newer than whatever version the application had last used to update. The catalog.z file looks like an McAfee ePolicy Orchestrator file which is mostly binary data. I made the choice to to assume that this used good crypto and that the update was signed so there would be no way to push down a malicious update to compromise a system. Instead, I wanted to use this to push down a shell script to later execute with the previous vulnerability.

The log files claim that the update process consists of: downloading a file, verifying its integrity, unzipping, and installing. 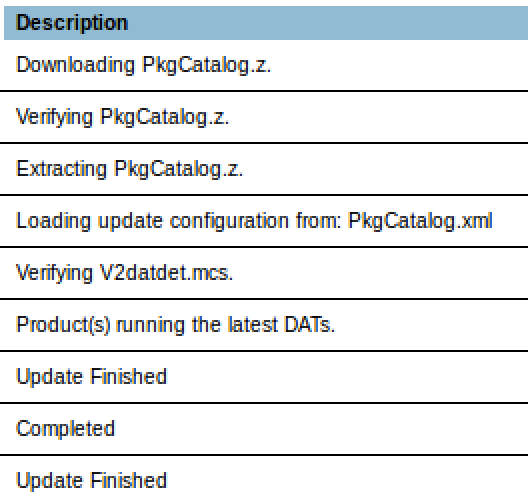 Since this application isn't single-threaded, we can exploit this logic by making the program download a large file to /opt/McAfee/cma/scratch/update/catalog.z, and either before the download finishes or before the verification runs, we can use Vulnerability 5 to execute it.

It's trivial to generate a shell script that will take a while to download, but will execute a given payload when run before the download is finished. This can be done by creating a script that contains a desired payload and then appending the payload with a large comment.

Combining vulnerabilities 5 and 6 now gives us a privilege escalation allowing us to go from the nails user to root. Using CSRF or XSS, it would be possible to use these vulnerabilities to remotely privesc to root.

In an attempt to develop an XSS and CSRF exploit, I threw together a simple cookie stealer and took a cookie from an authenticated user. But when I tried to use the cookie from my "attacker" machine, my authentication was denied:

After confirming that the token worked on the original machine, I thought that the authentication tokens might be limited to a specific IP address. This would make writing an exploit more difficult, but it could still all be done via XSS using JavaScript in a victim's browser.

When a user authenticates through the website, a message is passed via a unix-socket to the root service. The root service validates the credentials and returns its results to the webserver. To find what was going wrong when a remote machine used my cookie, I used socat to man-in-the-middle the socket to see the messages.

Now we could see what was different between the two requests

It looks like the webserver is sending the requester's IP address in addition to their cookie when it makes an AUTH request. Although it's a bit unusual, it's not a terrible security decision.

Our cookie is being sent via a text-based protocol and after our cookie, there's some number of spaces and the IP address. But if we modify this to make our cookie end with a space followed by the victim's IP address and then a number of spaces, it will be parsed incorrectly.

Instead of having the message sent on the socket be

We'll modify our cookie so the message sent is

The service incorrectly parses this line and believes that it's reading a cookie sent from the victim's IP address.

After seeing the previous cookie-parsing logic fail, I wanted to test how well the other cookie validation logic worked.

Only two parts of the cookie seems to change between typical login attempts. The cookie format seems to be

While using a time stamp for a secret value is a bad idea since it could be brute forced, using two in conjunction would normally make this difficult. Fortunately, that's not the case here. Some basic testing found that the acceptable values for these fields differed significantly from what they were typically set to:

This leaves us with one value to brute force; the time at which the server was started at. Starting at the current date and decrementing it until we've successfully authenticated can be done by modifying the DATE value in the following cookie:

Users can export a CSV of all log data from the "System Events" page by clicking an export button which just makes a GET request.

When this request is sent, one of the parameters is info%3A0. This parameter typically holds the value multi%2Capplication%2Fvnd.ms-excel. The server responds to this request with a header Content-Type: application/vnd.ms-excel. An attacker can create a link that responds with arbitrary headers by simply urlencoding newlines plus additional headers. 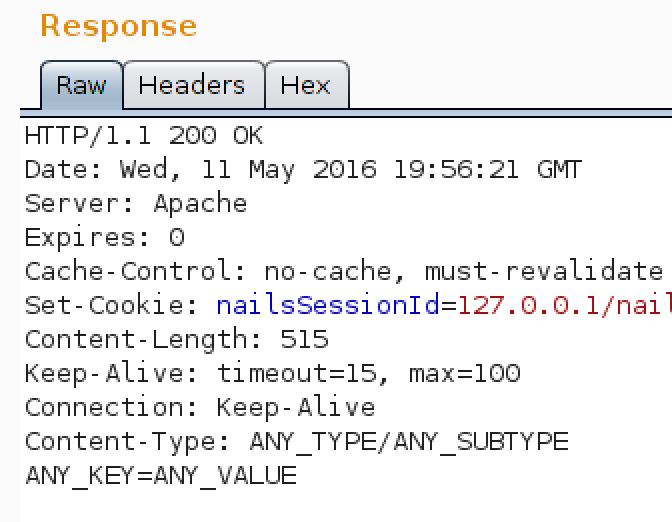 This system uses a SQLite database to store data about settings and previous scans. Every entry point to this database I looked at was vulnerable to SQL injections. This application appears to translate URL arguments into SQLite commands. Using the CSV-export function mentioned in the discussion of vulnerability 9, we can dump the sqlite_master table in CSV form simply by visiting a URL. The query select * from sqlite_master; is embedded in the URL localhost:55443/0409/nails?pg=proxy&tplt=-&addr=127.0.0.1%3A65443&mon%3A0=db+select+_show%3D%24*++_output%3Dcsv+_table%3Dsqlite_master+&info%3A0=multi%2Capplication%2Fvnd.ms-excel. 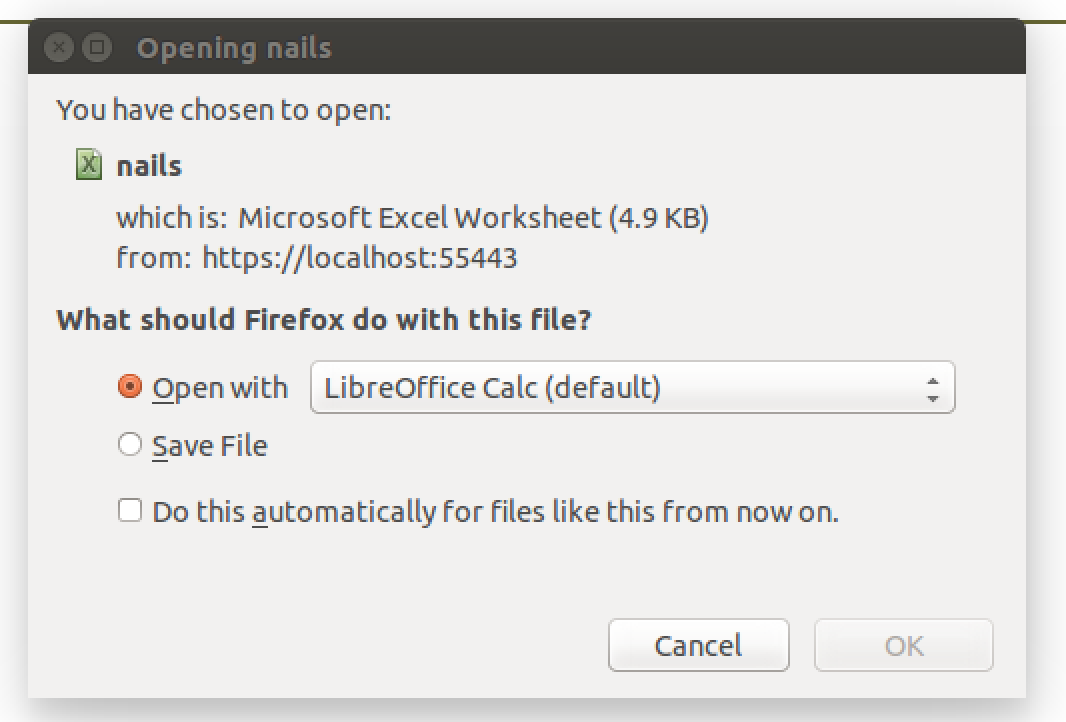 The database isn't used for authentication, just to track which files have been scanned and the event log. After exploiting other vulnerabilities to compromise a machine, an attacker could use SQL injections to modify the event log to clean up their tracks.

The schema of this database is:


Bringing it all Together: Remote Code Execution as Root

To execute code as the root user on a remote machine:

Exploiting this vulnerability depends on the existence of a valid login token which is generated whenever a user logs into the web interface. These tokens are valid for approximately an hour after login.